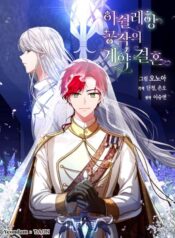 The Duke of Ashleyan’s Contractual Marriage:

Read manhwa The Duke of Ashleyan’s Contractual Marriage / 아쉴레앙 공작의 계약 결혼 / Duchess Aishling’s Contract Marriage / The Contractual Marriage of the Duke Ashillean After the ‘Tyrant King’ killed our parents, we managed to defeat him in a coup d’etat. My younger sister became the Emperor and I became the Duke who ruled the beast-infested Northern territory. We took our revenge and my younger sister has become the Emperor, so there’s only one task left – the oath I made to God right before helping my younger sister. In order to fulfill that oath, I’ll have to get married. But for someone like me who has never had a relationship before, ‘love’ is more difficult than war or fighting a dragon. However, the illegitimate son of the tyrant, the Prince, has just proposed a contractual marriage…? “Three years. Please just stay married to me for three years. I will divorce you right after that.” “What is he saying? And yet, why does he keep catching my eyes?”

Player Who Can’t Level Up

The Rebirth of an 8th-Circled Mage

Return of The Unrivaled Spear Knight

The World After The End

Reincarnation of the Suicidal Battle God